Her Loyal Role: The Female Combatant 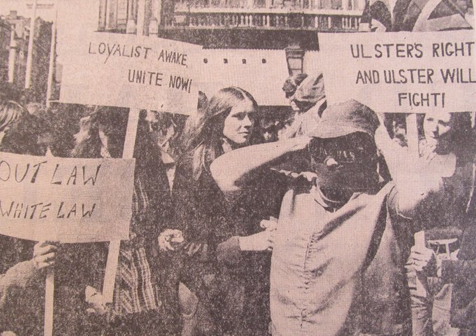 Have we forgotten the many different types of representation of Loyalist women?  Have we acknowledged the many roles women have played?  I have had the pleasure of meeting many women who have played many different roles within Loyalism.  From the female combatant to the female non-warrior.

Let’s talk about the female Loyalist combatant.  I would guess that not many people would acknowledge or know they existed. It probably comes down to the presumption that a woman would not participate in violence or that if she did it would be unnatural.

Yes, female combatants in Northern Ireland did exist and were in the minority overall, with 1 in 20 who were detained being a woman, that’s an estimated 1018 between 1972 and 1998.[1]

It reduces further when you break it down between female Loyalist combatants and female Republican combatants.  There were so few female Loyalist combatants that they were unable to operate formal structures in prison.  Researcher Sandra McEvoy suggested that Loyalist organisations had “approximately two dozen active women’s units at various times throughout the conflict with a combined membership as high as three thousand women.’[2]

My father was in the UDA so reading up about them seems a natural place to start for me.  In terms of women in the UDA, there have been several UDA Women’s Units over the years, all acting independent of each other.[3]  The Women’s Units were involved in shows of strength, roadblocks, moving ammunition, local community work and being responsible for the assembly and delivery of food parcels to UDA prisoners.[4]

One of the first women’s units was formed on the Shankill by Wendy Millar who had two nicknames – “Bucket” and “Queen of the UDA”.  Although there were other women’s units set up in other areas, the Shankill Road unit was particularly active and highly visible.

The UDA women’s department was headed by Jean Moore who came from the Shankill.  Jean was also the president of the women’s auxillary division in the Loyalist Association of Workers.  There is an excellent interview transcribed over on Gareth Mulvenna’s blog The Troubles & Beyond.

Jean talks about politics and reflects on politicians.  She comments “I feel it is time working class men and women had a say in the affairs of Ulster.  For too long we have had the landed gentry coming round at elections and promising us the earth.  But once they are voted in, they don’t want to know you.”  These sentiments are very much reflected in the interviews I have undertaken for the blog.

Hester Dunn, born and brought up in east Belfast headed up the Women’s Department within the UDA.  Her role was to encourage women to take an interest in what was happening in the community.  It’s reported that Hester never actually joined the UDA, she carried out administration work in the public relations section of the UDA.  Hester also contributed to the UDA’s magazine Ulster for over 10 years being encouraged by the leadership to write about women’s issues. Hester left the UDA after the death of John McMichael in 1987.

The Sandy Row women’s unit gained notoriety when in July 1974, its then commander Elizabeth “Lily” Douglas ordered the beating of Ann Ogilby.  Ann was subsequently beaten to death.  The death is often referred by as the “Romper Room” killing.  Romper Rooms were locations where UDA victims were brought to be “rompered” a slang term for torture and beating.  The whole community was shocked by these actions.  The women’s unit was stood down and Douglas and ten others were imprisoned for Ann Ogilby’s murder.[5]

In Conversation with Shirley McMichael
Her Loyal Role: The Female Band Member – Interview with Charmaine Moore