Getting to know the Brown Square Millionaires 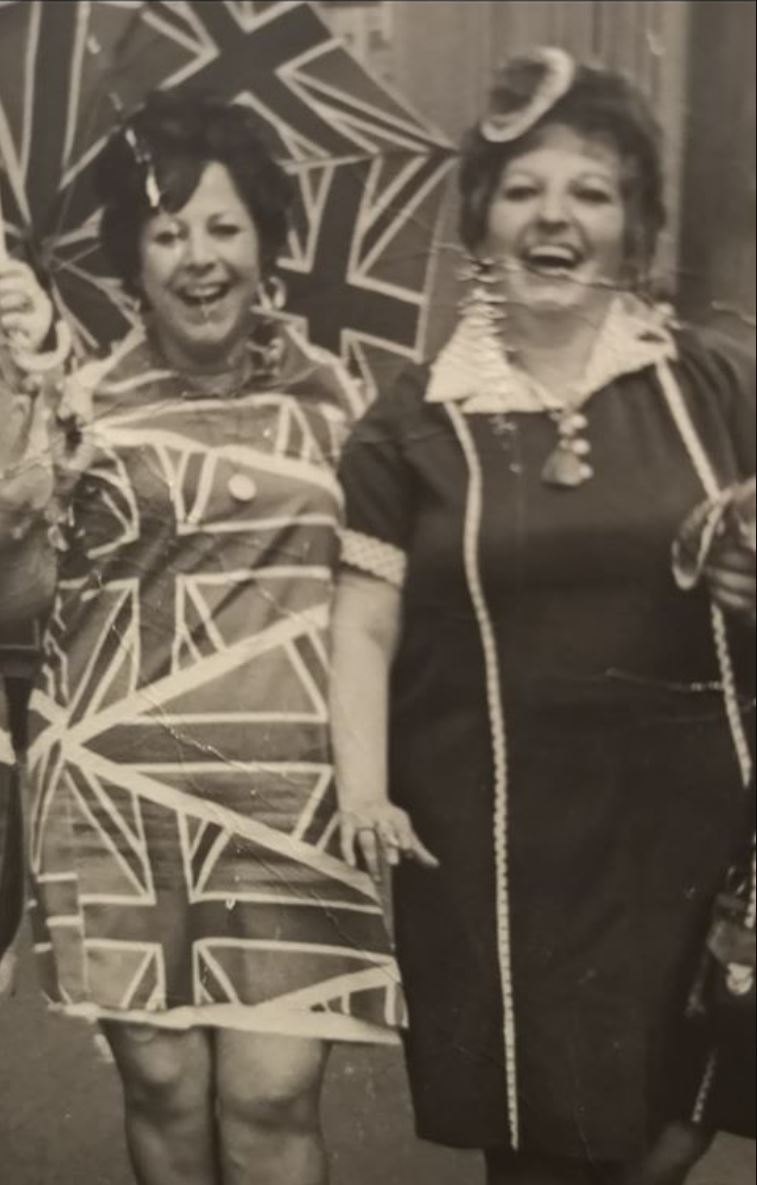 Too many working class Loyalist women have been forgotten or whitewashed from history. It’s time to share the stories and reclaim the history of these remarkable women. I’m delighted to share with you the story of the Brown Square Millionaires through the voice of their children, Patricia Ward (nee McCallister) and Yvonne Murphy (nee Thompson).

Ellen Rea, Maggie Lamont and Eileen McAllister lived in Brown’s Square on the Shankill until redevelopment moved them from the area in 1971.

If you have heard of the Brown Square Millionaires, then you will probably have heard of their dressmaking and singing skills.  These women sewed and sang their way into Loyalist history by making Union Jack dresses sometimes made from tea towels sewn together and recording many a Loyalist record.  The majority of the dress sewing was by hand until they acquired a sewing machine. They also knitted cardigans and bonnets coming up to the celebration of the Twelfth.

These wonderful women fascinate me for the simple reason that their dedication to celebration of the Loyalist culture was remarkable.  There is now a caricature of loyalist women which needs to be challenged.  This is often something that happens to women who challenge the status quo.  These women were proud Loyalists, they were proud of their heritage, their culture and their story shows us that as women we can challenge the status quote and we can also claim our history.

I am delighted that Patricia Ward and Yvonne Murphy have shared their family history with me.

Maggie Lamont was in the Orange Lodge so celebration was always something that she took seriously as did the whole family.  The making of and wearing Union Jack dresses became a tradition that has been handed down to both Patricia and Yvonne.  As Patricia notes “it is about celebrating our culture and heritage, it means the world to me that my Great Gran, my Gran and my Mother started this tradition and I carry it on now with my two sons joining the Orange Order and my Grand-daughter dressing up for the 12th celebrations.”

Understanding the history of the Brown Square Millionaires is vital to understanding the traditions which encapsulate the meaning of loyalism.  After spending hours sewing Union Jack dresses the whole community within Brown Square would walk down to the GPO building in Royal Avenue to await the arrival of the bands on the 12th July.  The Brown Square ladies would entertain the crowds with their dancing and songs while waiting for the main parade to arrive.

The crowd’s response was fantastic towards the women as they watched and listened to these women sing songs such as “We’re the People from the Shankill Road” or “Brown Square in the Summer”.  The sense of belonging and the sense of being proud of where you are from was reflected not just bey these women but for all members of their family. As Yvonne reflects: “I am so proud of the traditions my family started, all the women from Brown Square – whether they were related to me or not – were my family.  My mum took pride in making the dresses and sashes and we take pride in carrying on that tradition.”

When Brown Square was being redeveloped everyone within the street had to move, they all moved up to the Shankill Estate together in 1971.  That special connection that started in Brown Square carried on with them to their new homes – which were certainly a lot bigger and better than the previous smaller 2-up 2-down houses they were crammed in to.

The special connection between everyone who lived in Brown Square is still felt to this day.  Many of those are still in contact and still talk about the days of making Union Jack dresses and everyone going to the GPO on the 12th and all the dancing and singing.

The song “Loyalisim and the Shankill Road” Went like this…

Eileen McAllister went on to record 5 songs on Loyalist records. Her first two being “Aghalee Heroes” and “I know A Road”. These were followed by “YCV Brigade”, “We’re the People from the Shankill Road” and “Shankill Citadel”. Of course the whole family including her sister Ellen sang together, indeed the whole Rea family were entertainers who also played instruments and put on shows and get-togethers.

To the Brown Square Millionaires, may we remember them and may we celebrate them: